December 22nd, 2018
You will need a Flutter development environment set up on your machine.

This is a three-part series. You can find the other parts here:

In the two previous tutorials we saw that widgets are blueprints for everything that you can see (and many things that you can't see) in the user interface. Simple widgets can be combined together to make complex layouts. The majority of these layouts can be built by dividing your design into rows (use the Row widget), columns (use the Column widget), and layers (use the Stack widget).

The thing about those layouts, though, is that they were static. You could touch and tap and swipe them all day and they wouldn't do a thing. We are going to fix that in this lesson.

Today we’re going to explore how to actually do something when the user interacts with the widgets that we’ve added to our layout. The emphasis will be on simple, easy to reproduce examples. I strongly encourage you to work along as we go through each one. Make little changes to the code and see how that affects the behavior. This will greatly increase your overall learning.

This tutorial is for beginning Flutter developers. However, I’m assuming that you have the Flutter development environment set up and that you know how to create basic layouts using widgets. If not, refer to the following links:

In this tutorial we’ll start to do a little more programming with the Dart language. I’m assuming that you have a basic knowledge of object oriented programming, but I don't assume that you know Dart.

This lesson was tested using Flutter 1.0 with Android Studio. If you are using Visual Studio Code, though, it shouldn't be a problem. The commands and shortcuts are a little different, but they both fully support Flutter.

Before I give you the boilerplate code that we’ll use in the examples below, let's see if you can create the following layout on your own. 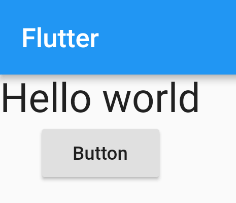 How did you do? If you weren't able to do it, you might want to check out the previous lesson on building layouts. You may have created something like this:

That layout above was fine as far as layouts go, but if you try to change the text when the button is pressed, you’ll run into problems. That's because widgets are immutable: they can't be changed. They can only be recreated. But to recreate the Text widget we need to put the string into a variable. We call that variable the state. It’s similar in idea to the phrases “the state of affairs” or a “State of the Union Address,” which deal with the current conditions of some people or country. Similarly, when we talk about a widget, the state refers to the values (in other words, the current condition) of the variables associated with that widget.

Note: Behind the scenes there is also an Element that is created from the widget. But as I said, it's behind the scenes and we can happily ignore it at this point in our journey.

So practically speaking, whenever we need a StatefulWidget, we have to create two classes, a widget class and a State class. Here is the basic setup:

Now that we’ve talked about state, we’re ready to use it to make our widgets respond to user input.

Replace the code in your main.dart file with the following code:

Run the code that you pasted in above. It should look the same as our original layout, but now the first time we press the button, the text gets updated.

In this example whenever a TextField is changed, the Text widget above it gets updated.

For a checkbox with a label you can use a CheckboxListTile.

There are a few kinds of dialogs in Flutter, but let's looks at a common one: the AlertDialog. It's not difficult to set up. 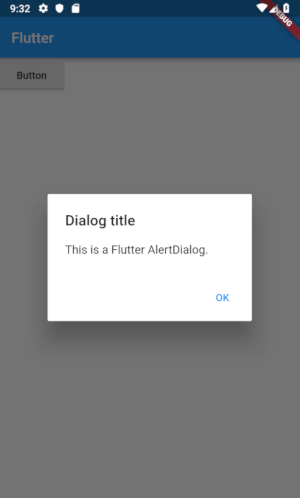 In the examples above we’ve seen how to respond to user input using some of the common widgets that are available. These widgets provide callback properties like onPressed and onChanged. Other widgets (like Text or Container) don't have a built in way to interact with them. Flutter gives us an easy way to make them interactive, though. All you have to do is wrap any widget with a GestureDetector, which is itself a widget.

For example, here is a Text widget wrapped with a GestureDetector widget.

When the text is tapped, the onTap callback will be run. Super easy, isn't it?

You can try it. Every time you tap the text, the color changes.

Add import 'dart:math'; to your main.dart file and replace the _MyWidgetState() class with the following code:

You are not limited to detecting a tap. There tons of other gestures that are just as easy to detect. Replace onTap in the code above with a few of them. See how the gestures are detected.

A lesson about responding to user input wouldn't be complete without talking about navigation. How do we go to a different screen in Flutter? And once there, how do we go back?

Well, as you might expect, a new screen in Flutter is just a new widget. The way to get to these widgets is called a route, and Flutter uses a class called a Navigator to manage the routes. To show a new screen, you use the Navigator to push a route onto a stack. To dismiss a screen and go back to the previous screen, you pop the route off the top of the stack.

Here is how you would navigate to a new widget called SecondScreen.

Here is how you would return from the SecondScreen back to the first one.

Does that look familiar? Yes, we already used that same code to dismiss the AlertDialog that we made before.

Try it out yourself. Here is what it will look like on the iOS simulator.

Replace all of the code in main.dart with the following code.

Sometimes you need to send data to the new screen that you are displaying. This is easy to do by passing it in as a parameter in the SecondScreen widget's constructor.

The Dart constructor syntax may look a little strange to you. Here is a brief explanation:

Now that the constructor is set up, you can pass in data when you call it from the FirstScreen.

You can find the full code for the example here.

At other times you need to send data back to the previous screen. Flutter does this in an interesting way.

You can find the full code for the example here.

In this lesson we have gone from static layouts to dynamic ones with widgets that respond to user input. Making responsive widgets like this means that we need to deal with things that change, whether it's text, color, size, or any number of other things that affect the UI. The value of these variables is known as the state, and widgets that have state are known as StatefulWidgets.

Properly managing state in Flutter is a big topic. You have already seen two ways to do it in this lesson. One was having a method variable in the State class. It was available to all of the widgets throughout the class. As the complexity increases, though, it is not practical to include the entire layout in a single build() method, nor is it good practice to allow global variables.

Another way we managed state in this lesson was passing data as a parameter into another widget. This works great when one widget is directly calling another, but it can get cumbersome when you need the state from another widget somewhere far away in the widget tree.

As you continue to study you will hear about topics like inherited widgets, Streams, BLoC, and Redux. They are things that you should learn about eventually, but don't worry about them right now. I like what Hillel Coren said:

My approach when working with a new technology is to start with the simplest implementation and only add in extras once I’ve felt the pain they’re designed to eliminate.

You already know enough now to begin making Flutter apps. You can deal with the difficulties as they come. So take that app design that you've got in your head and start creating it! You’re ready to go!

This concludes our First Steps with Flutter series. You can find the code for this tutorial on GitHub.