In this tutorial we are going to build our backend service using Vapor. It will be responsible for sending a notification to our iOS application.

Setting up our Vapor backend

From a terminal in your working directory enter the following command to create your Vapor application.

Now we will build your application before opening it in Xcode. Remember your first build could take some time to complete. Vapor update will make sure that you have the latest packages.

Now open your project in Xcode. Remember to open using Xcode you must run the following command in terminal:

Also remember to change the run scheme to be the “run” scheme in case it is not already set to this.

We need to add the Pusher Beams package to our Swift Package Manager (SPM). Start by opening the Package.swift file from the project navigator. This is our dependencies management file, a bit like our Podfile or Cartfile in iOS development.

Below the line that gives us our Vapor package dependency:

Add the following to add our Pusher Beams dependency:

We need to tell SPM what dependencies each target should have. We do this by editing targets section in the same file. Find the line:

Edit it so that it becomes:

Now we need to close Xcode and install the package and reopen it. It’s best practice in Vapor to create and install files outside of our Xcode project using command line tools and then reopen Xcode using the toolbox command. After closing Xcode run the following command in the terminal in our working directory. 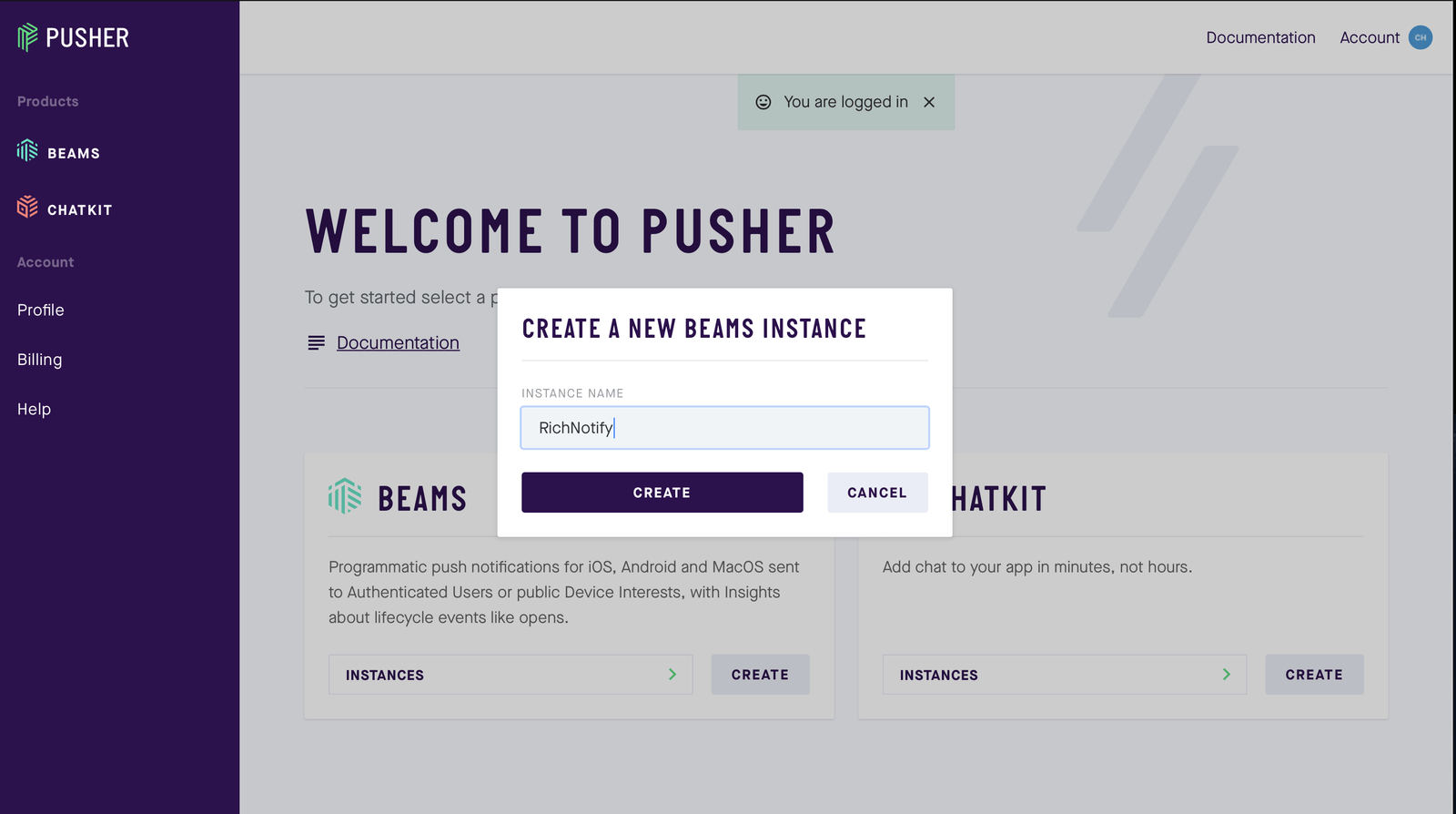 Complete step one of the iOS setup guide, we will pick up the remainder later on in this tutorial. Press the X to exit the setup guide and you will be returned to your dashboard for that instance. Scroll to the bottom of this page and you will find your Pusher Beams instance ID and secret key, make note of these you will need them later.

Rich notifications allow you to send different types of multi-media content. There are specific types of supported content that you can send. You can find up to date information on those content types here. You should also make note of the maximum size these files can be.

We will be creating a simple application with one post request that we can use in order to send different push notifications using our REST client.

Open your routes.swift file and replace the contents with the following:

Hit the run button in Xcode, you should see a message in the console saying it has started and is listening on http://localhost:8080. Leave this running in the background whilst you complete part two.

Now that you have a basic backend setup we need to go ahead and create the iOS application that can display these notifications. Stay tuned for part two!

The source code for this project can be found here.