You will need Node, Yarn, ngrok and Expo installed on your machine. Some knowledge of React Native development is required.

In this tutorial, we’ll build a realtime memory game app with React Native and Pusher Channels.

To easily test the app on multiple devices, we’ll be using Expo to create it. Be sure to install their Android or iOS client apps. Log in to your Expo account on both the CLI and client apps. Create one if you don’t have it already.

These are the package versions used in creating the app:

Lastly, you also need a Pusher and ngrok account. We’ll use it to create a Pusher app instance and expose the local Pusher server to the internet.

When they open the app, users will be greeted by a login screen where they have to enter their username: 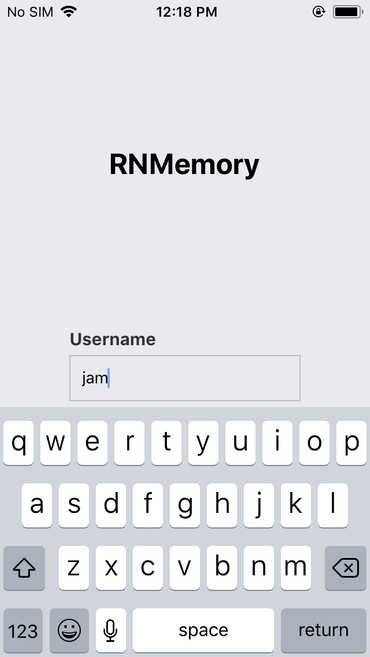 When a user logs in, the app’s server component will pick two random users and they’re the ones who will play.

Once an opponent is found, both users are automatically navigated to the Game screen. By default, there will be a lot of question mark icons, these represent the cards that haven’t been opened yet: 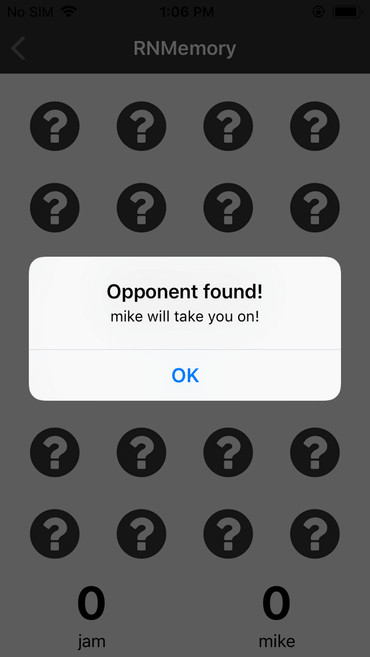 To play the game, users have to click on each one to reveal its content. Users can reveal the content of up to two cards before both of them closes. Once a user has selected a pair, they will stay open for the rest of the game.

Here’s what the screen looks like while the two players are playing the game: 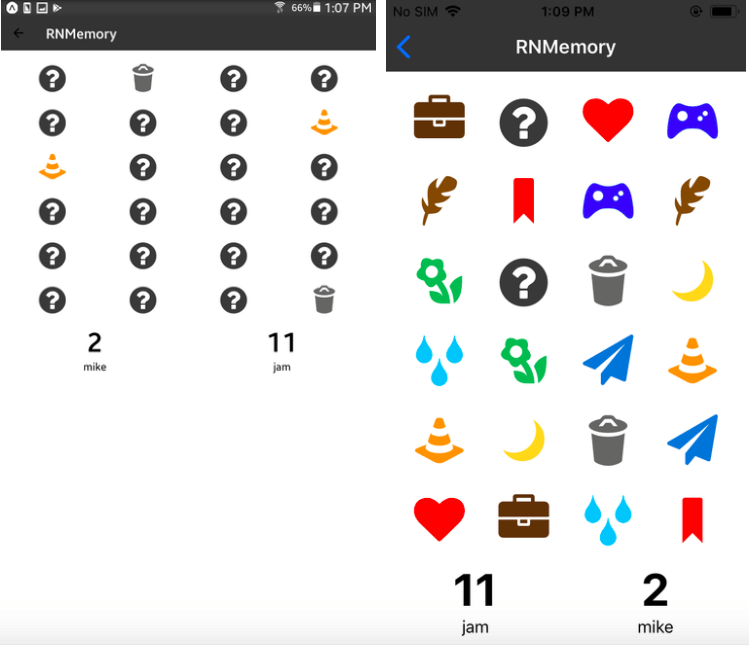 When one of the players accumulates the maximum score (in this case it’s 12), both players are notified that one of them already won and the UI is reset: 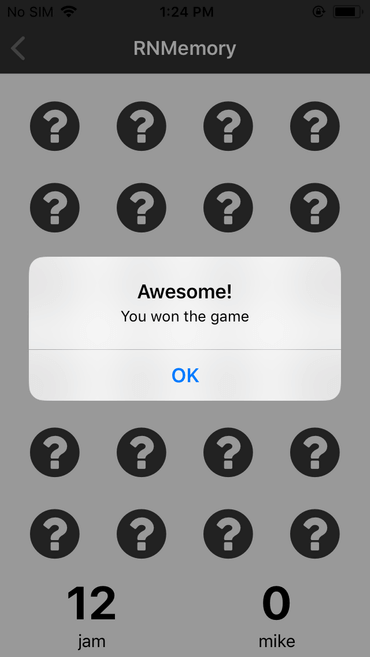 You can view the app’s source code in this GitHub repo.

You need to create a Pusher app instance so you can use Pusher’s services.

On your Pusher account dashboard, create a new Pusher app and check the Enable client events in the app settings. This allows us to emit events directly from the app: 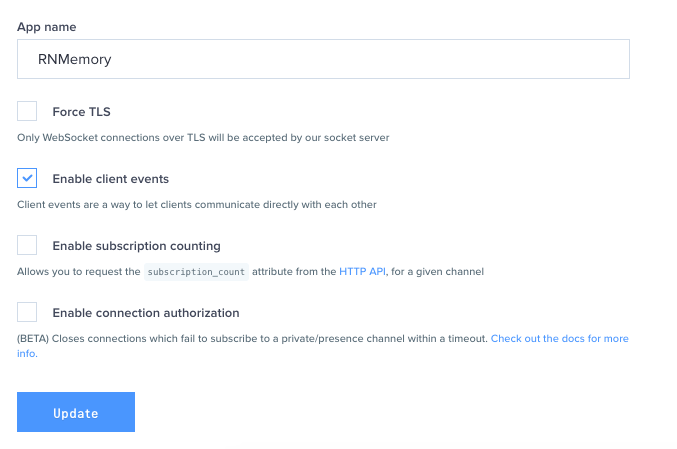 So that we can focus on the main parts of the app, clone the app’s GitHub repo and switch to the starter branch:

The starter branch contains all the screens of the app (Login and Game screen), helper functions, and the UI components that we will be using. The app screens and the server component are where we will do most of the work.

Next, install all the packages the app and the server depend on:

Before we proceed to actually code the app, let’s first take a quick look at the files and folders that are already available in the starter project:

We’re now ready to start building the app. I encourage you to start running the app even if the code is still not complete. This allows you to visualize what the code does as we’re adding it:

In the Login screen, start by importing all the packages we need:

Next, initialize the state and the user’s channel:

Inside the render function, return the UI for the Login screen. In this case, we’re only asking the user’s username. The login button is visible by default, but it gets hidden in place of the activity indicator when the user clicks on it. It stays that way until such time that an opponent is found:

When the login button is clicked, the login function gets executed. This will connect the user to Pusher and subscribe them in their own unique channel. Subscribing the user to their own channel allows us to:

Don’t forget to add your Pusher App ID when connecting to Pusher. As for the authEndpoint, we’ll add it later once we run ngrok.

Next, add the code for listening for the opponent-found event. This event is emitted from the server once two random users are matched. Both players are notified when that happens, and it will automatically navigate the user to Game screen:

We now move on to the Game screen. Start by importing the packages, helpers, data, and components we need:

Next, initialize the state:

Next, add the constructor. This is where we add initial values for the Pusher channels and generate the cards, which will be rendered on the screen:

Once the component is mounted, we pick up the navigation params that were passed from the Login screen earlier. This allows us to listen for events emitted by the opponent, and emit events from our own channel:

Next, we render the Game screen. Here, we use a FlatList to render all the cards. Below it, we use the Score component to render the username and score for both users:

The renderCard function renders each individual card. This is where we use the Card component to render each card. We pass in the data which determines how the card will look like as props. The clickCard prop is where we pass the function to be executed when the card is clicked:

Here’s the clickCard function. This is where we process the card opened by the user. We only process cards that aren’t already guessed by the user and is not already opened. If both conditions are true, we add the card to the array of currently selected cards (selected_pairs):

Once the user has already picked a pair of cards, we check whether their names are the same. If it does, we increment the user’s score by one and notify the opponent by emitting an event in the current user’s channel. This works because we’ve set up the current user to listen for events emitted from their opponent’s channel. So anytime we trigger an event on our own channel, the opponent gets notified. Once the current user accumulates the maximum score, we reset the UI and notify the opponent. On the other hand, if the pair selected by the user isn’t the same, we update the state to close the cards:

Lastly, the resetCards function is where we reset the UI so the users can resume the game if they want to:

Now we’re ready to add the server component. This is where we add the code for authenticating users as well as matching them so they can start playing the game.

Create a server.js file inside the server folder and start importing the packages we need and initialize them:

Next, initialize the array of users. This is where we will store the usernames of the users who log in to the app:

Next, initialize the Pusher connection using the credentials from the .env file:

If you haven’t done so already, this is a good chance to update the server/.env file with your Pusher app instance credentials:

Next, add the function for returning a random integer (from zero) that’s not greater than the max passed as an argument:

Next, add the route which receives the Pusher authentication request. From the login code of the app/screens/Login.js file earlier, we added the username in auth.params. This is what we’re accessing in the request body. A username should be unique so we first check if it already exists before processing the request further. If it doesn’t yet exist, we push it to the users array. Once there are at least two users, we pick two random users from there. Those two users will be the ones who will partake in the game. We trigger the opponent-found event on each of the user’s channel. The event contains the username of the two users. This allowed us to determine which of the users is the opponent and which is the current user from the app/screens/Game.js file earlier. Once that’s done, we authenticate the two users and return the authentication token as the response:

Lastly, serve it on the port you’ve specified in your server/.env file:

At this point, we should be ready to run the server and expose it to the internet.

Execute the following inside the server directory to run the server:

Next, navigate to where you downloaded the ngrok executable file and execute the following:

Try if the server is running correctly by accessing the https URL returned by ngrok on your browser. If it says “all green…”, the next step is to add the ngrok URL to your app/screens/Login.js file:

Once that’s done, the app should work fully:

You can view the app’s source code in this GitHub repo.