July 2nd, 2018
You will need the following installed on your machine: Xcode, the Laravel CLI, SQLite and Cocoapods. Familiarity with the Xcode IDE will be helpful.

Cryptocurrency has been and is still one of the biggest trends this year. With currencies like Bitcoin reaching record highs and new companies creating tokens and offerings, it’s showing just how much potential cryptocurrencies have. However, cryptocurrency prices are erratic and can fall or climb at a moments notice, so it’s always a good idea to keep tabs on the changes.

What we will be building

How the client application will work

For the client app, the iOS application, we will create a simple list that will display the available currencies and the current prices to the dollar. Whenever the price of the cryptocurrency changes, we will trigger an event using Pusher Channels so the prices are updated.

How the backend application will work

For the backend application, we will be using Laravel and we will create endpoints that allow a user update the settings and load the settings for a device. The API will be responsible for checking the current prices of the cryptocurrency and sending both a Channels update and a Beams notification when the price changes.

However, because the prices don’t change very predictably, we will be simulating the currency changes so we can preview the application in action. We will also be using task scheduling in Laravel to trigger the checks for the current currency prices.

In a production environment we will set the scheduler as a cronjob, but because we are in development, we will manually run the command to trigger price changes.

How the application will look

Setting up Pusher Beams and Channels 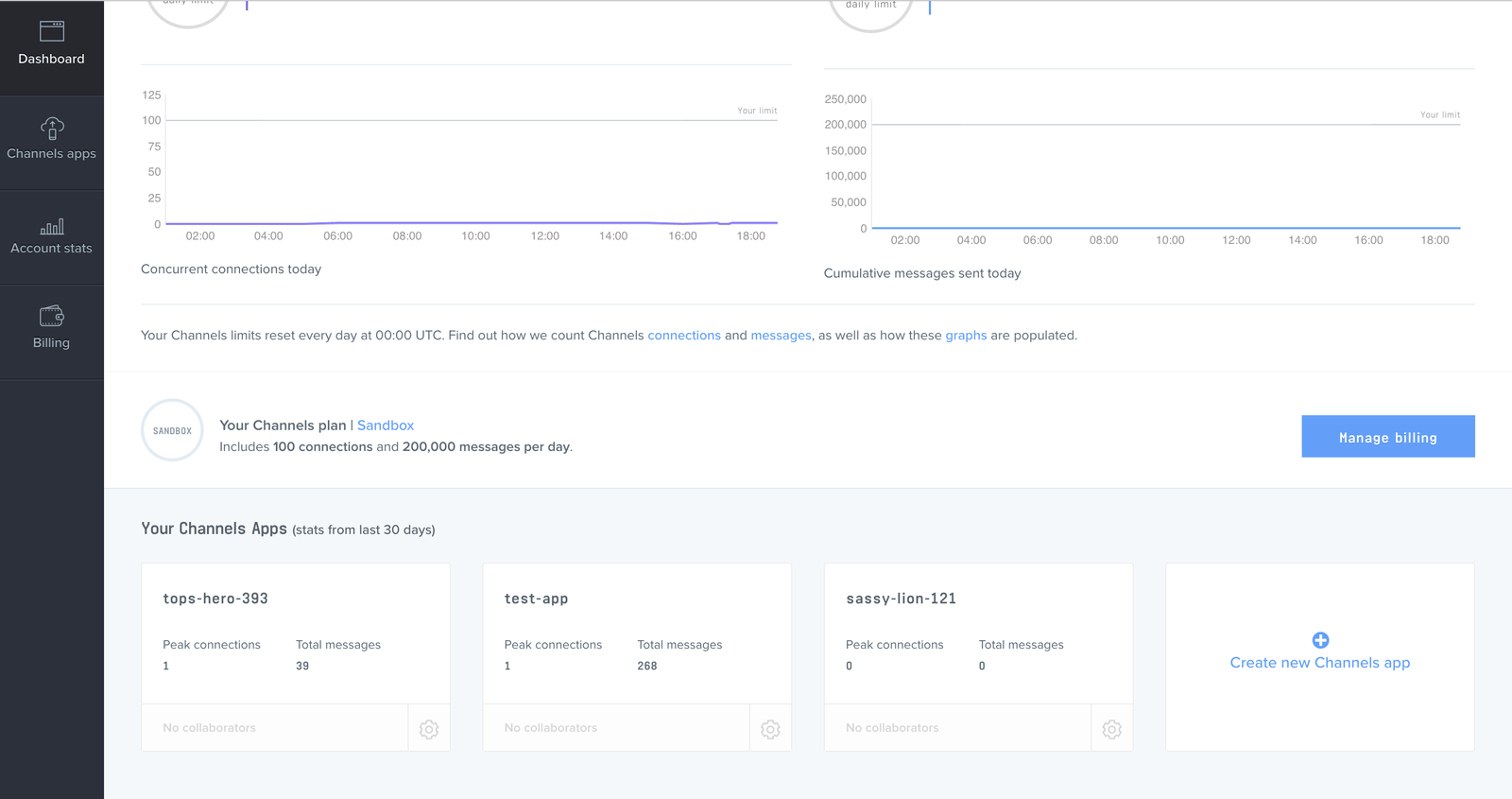 Next, log in to the new Pusher dashboard, in here we will create a Pusher Beams instance. You should sign up if you don’t have an account yet. Click on the Beams button on the sidebar then click Create, this will launch a pop up to Create a new Beams instance. Name it cryptoalat. 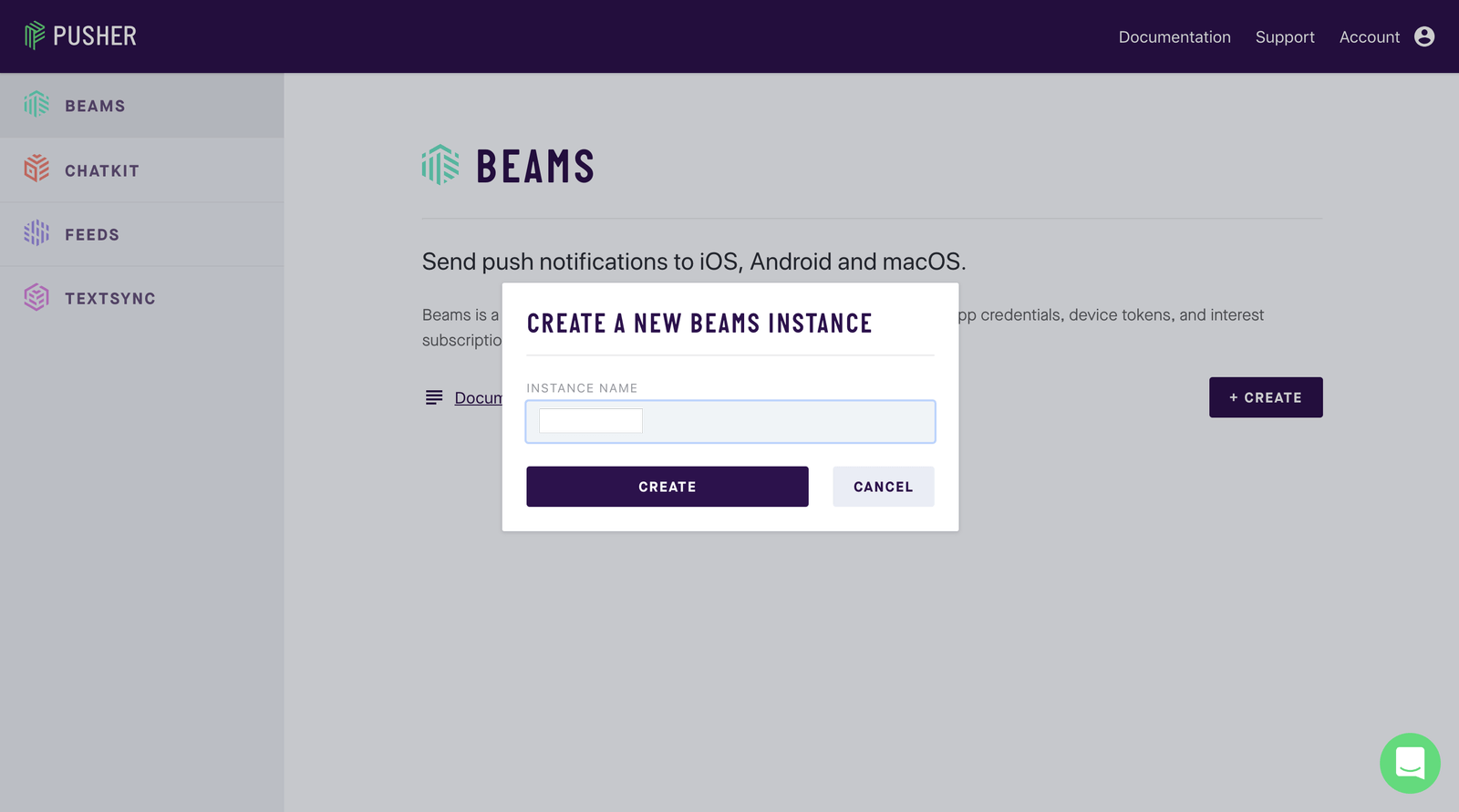 As soon as you create the instance, you will be presented with a quickstart guide. Select the IOS quickstart and follow through the wizard. 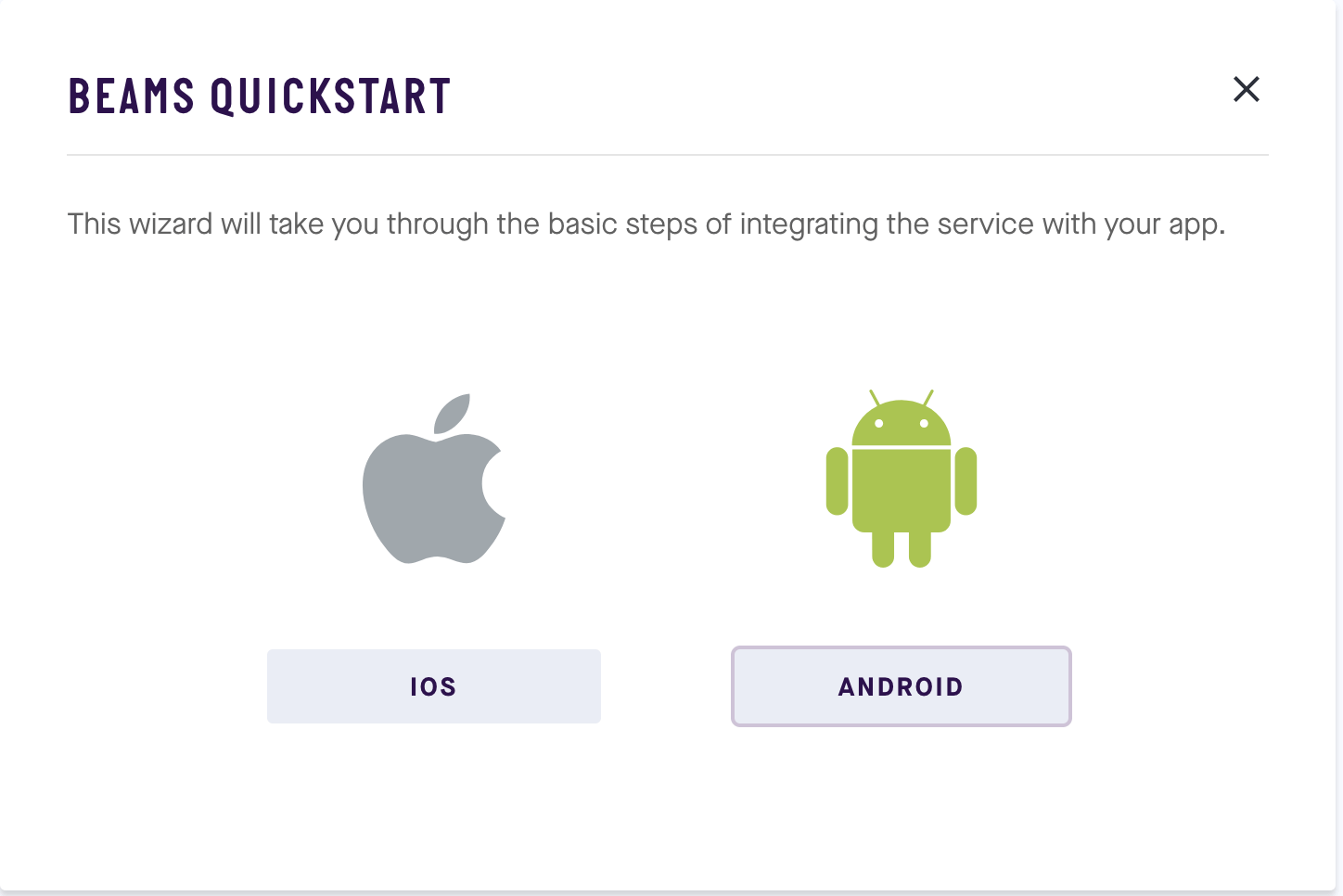 When you are done creating the Beams application, you will be provided with an instance ID and a secret key, we will need these later.

Setting up your backend application

In your terminal, run the command below to create a new Laravel project:

This command will create a new Laravel project and install all the required Laravel dependencies.

Next, let’s install some of the project specific dependencies. Open the composer.json file and in the require property, add the following dependencies:

Now run the command below to install these dependencies.

When the installation is complete, open the project in a text editor of your choice. Visual Studio Code is pretty nice.

Setting up our Pusher Beams library

The first thing we want to do is set up the Pusher Beams library we just pulled in using composer. To set up, open the .env file and add the following keys:

You should replace the PUSHER_BEAMS_* placeholders with the keys you got when setting up your Beams application.

Next, open the config/broadcasting.php file and scroll until you see the connections key. In there, you’ll have the pusher settings, add the following to the pusher configuration:

Setting up our Pusher Channels library

Open the .env file and update the following keys below:

Above you set the BROADCAST_DRIVER to pusher and then for the other PUSHER_APP_* keys, replace the placeholders with the keys gotten from your Pusher dashboard. That’s all we need to do to set up Pusher Channels for this application.

Now that we have set up all the dependencies, we can start building the application. We will start by creating the routes. However, instead of creating controllers to hook into the routes, we will be adding the logic directly to the routes.

Setting up the database, migration, and model

Open the .env file and replace:

Next, let’s create a migration for the devices table. We will use this table to store devices and their notification settings. This will help us know what devices to send push notifications to.

Run the command below to create the migration and model:

The -m flag will instruct artisan to create a migration alongside the model.

Open the *_create_devices_table.php migration file in the database/migrations directory and replace the contents with the following:

In the up method, we have defined the structure of the devices table. We have the uuid field which will be a unique string for each device registered. We have two btc_notify fields which are there to save the minimum and maximum prices of BTC at which point the device should be notified. Same applies to the* eth_*_notify fields.

To run the migration, run the command below:

Open the app/Device.php model and replace the contents with the code below:

In the model above, we have set the $timestamps property to false to make sure that Eloquent does not try to update the created_at and updated_at fields, which is the normal behavior.

We also have the scopeAffected method which is an example of an Eloquent scope. We use this to get the affected devices after a price change has occurred on a currency. So if, for instance, BTC’s price drops, this method will check the devices and the settings to see the devices that need to be notified of this change.

Local scopes allow you to define common sets of constraints that you may easily re-use throughout your application. For example, you may need to frequently retrieve all users that are considered "popular". To define a scope, prefix an Eloquent model method with scope. - Laravel documentation.

We will use this scope later in our application when we need to know what devices to send push notifications to.

Open the routes/api.php file and replace the contents of the file with the following code:

Next, let’s add the first route. Append the code below to the routes file:

Next, in the same routes file, paste the following at the bottom of the file:

Above, we have defined the route for the POST /settings route. This route saves settings to the database. It will create a new entry if the setting does not already exist or will update the existing one if it does.

That’s all for the routes.

Creating the jobs, events, and notifiers

Next, we need to create the Laravel job that will run at intervals to check if there is a change in the currency price.

Run the command below to create a new Laravel job:

This will create a new CheckPrices class in the app directory. Open that class and replace the contents with the following:

In the class above, we implement the ShouldQueue interface. This makes it so that the job can and will be queued. In a production server, queueing jobs makes your application faster as it queues jobs that might take a while to execute for later execution.

We have four methods in this class. The first one is the handle method. This one is called automatically when the job is executed. In this method, we fetch the prices for the available currencies and then check if the price has changed. If it has, we publish a Pusher Channel event and then check if there are any devices that need to be notified based on the user’s settings. If there are any, we send a push notification to that device.

Now every time we run the command php artisan schedule:run all the jobs in this schedule method will be run. Normally, in a production environment, we will need to add the schedule command as a cronjob, however, we will run this command manually.

The next thing to do will be to create the notifiers and events. In your terminal, run the following commands:

This will create a class in the Events and Notifications directories.

In the event class, CurrencyUpdated paste the following code:

In the CoinPriceChanged notification class, replace the contents with the following code:

That’s all for the backend, now just run the command below to start the server:

This will start a PHP server with our application running. Also if you need to manually trigger a currency change, run the command below:

Now that we are done with the backend, we can create the application using Swift and Xcode.

In this part of the article, we have created the backend for our cryptocurrency alert application. In the next part, we will be seeing how we can create the application that will consume the API we just created in this part.