Encrypted channels must be prefixed with private-encrypted-. See channel naming conventions. Currently, only private channels can be encrypted.

We really appreciate any feedback you might have around using encrypted channels so we can continue to make improvements. In particular, encrypted channels are currently supported in a limited number of client and server libraries -- please let us know if you would like support added to an additional library. We can be contacted by email or through our support form.

For encryption and decryption to work the server library must be instantiated with a 32 byte encryption key, encoded as base64.

This master encryption key is never sent to pusher and should be something difficult to guess. We suggest using something like the openssl command below to generate a random key and keeping it somewhere secure.

The base64 encoding of a 32 byte key will be 44 bytes long.
The key is encoded like this to ensure that the full range of values can be used for each byte, while the key can still be stored and passed to the library as an ASCII safe string.

When a subscription takes place the user authentication process will be triggered. In addition to providing an auth token, the authentication process to an encrypted channel provides an encryption/decryption key which is used by the client to decrypt events. This happens automatically and if you are using a supported library you do not need to do anything.

See binding to events for general information about how to bind to events on a channel object.

You can bind to the following pusher: events on an encrypted channel:

This feature hides the sensitive data field of your messages. However, by design, there are many things which this feature does not do, and it is important that you are aware of these. They include:

The debug console in your dashboard may help demonstrate which things are encrypted, and which are not.

Library support is limited to those listed below. If you want to use encrypted channels and your library isn't listed, please let us know!

Client events are not currently supported.

Because Pusher has no access to your encryption keys, key rotation is under your control. The client libraries make a best effort attempt to handle key rotation gracefully, but it is not guaranteed to be lossless.

Your encryption keys are held in your instance of the Pusher HTTP library which you run on your server. From here they are distributed to clients when they authenticate.

Your clients will respond to any failure to decrypt an event by making one request per failed event to refresh their key. This is not guaranteed to work if you have multiple instances of your server running, because it will take some time for them to roll out. During the roll-out there may be a mix of keys in operation, for both encryption and decryption.

During this period, clients may fail to decypt some events, even after requesting a new key (if, for example, that request is served by a server which is not yet updated). In this case, the client libraries provide a callback which you can register to be notified about events which failed.

Once the key rotation is complete, all servers and clients will converge on the new keys, and events will flow without loss again. 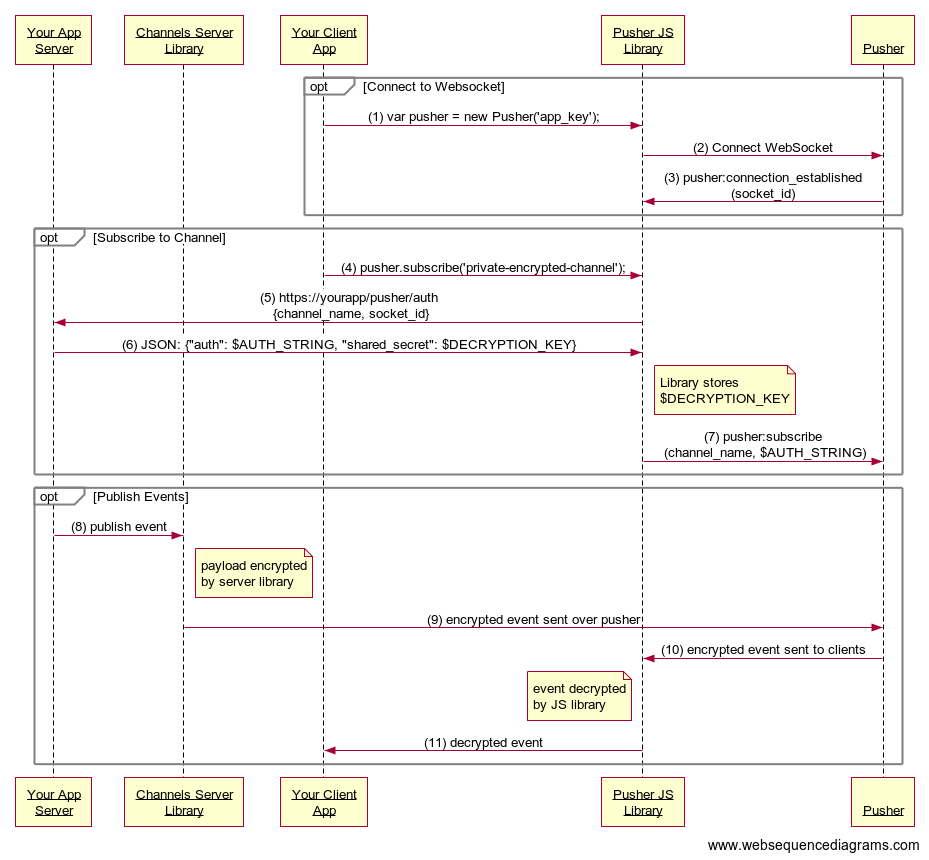